This last weekend proved that yes, I can drive 250 miles around (mostly Northern) Ireland without me legs dropping off. Which is a good thing. We went to many places, didn't drink any whiskey (due to the aforementioned driving), and I got to climb under a castle.

Rather than piss around with whatever flickr's doing this week, I've started putting photos taken while out and about on iCloud. Curated photos — as in, ones that don't suck too badly — are up here. Note that they still suck, they're just not as bad as the others. In general, maybe 10% of the pictures I take are usable in some way. We'll have to see if that improves. Some of them do come out looking quite nice, once I've had a chance to tinker. 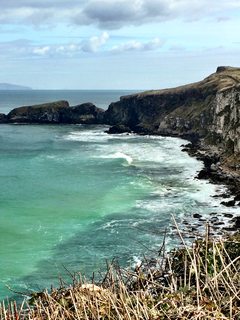 My shots of the recent eclipse are nowhere near as good; having to rely on digital zoom to get anything worth seeing is less than ideal, as demonstrated. 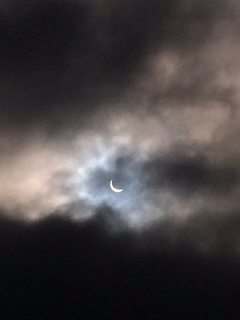 Anyway. Those things exist, and I'll keep updating that album when I remember.

Five days away is the longest I can manage without unnecessary fretting. More than that and I get antsy. An iPad is all well and good, and the keyboard cover makes a satisfying tapping sound, enough that I can feel like Hemingway with a portable typewriter on a small table in front of me, but it only works for that immediate step of getting ideas on a page. When it comes to structuring that idea, I need the appropriate tools — for long-form text that's Scrivener, while for the more pressing idea I had while I was away, I needed Twine and didn't have the time to get used to using the new web-based tools. I just needed to write.

While the food was nice, the lack of vegetables that are neither a) boiled beyond recognition or b) served in a cheese-based sauce proved a bone of contention. I like potatoes and cauliflower cheese as much as the next man, but I also like carrots, peppers, lettuce, peas, and all the other things that sit on a plate lending extra flavour.

But it was a much-needed break, one that helped recharge my creative batteries. Who knows, I might even have a chance to get back to writing later this year, rather than just developing. I had to put a halt on writing for a while to clear a backlog, but I'm feeling the itch.

The only problem is that, having just spent a long weekend around people while on holiday, I now have another weekend of being around people at Conpulsion. Which is great, don't get me wrong. I'm just a bit people'd out at present. One of these days I'll pay attention to a calendar and schedule things sensibly.